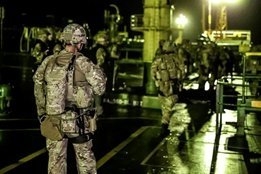 Royal Marines from 42 Commando took part in the seizure of Grace 1 on the 4th July 2019 in the Gibraltar Strait. Image Credit: MoD

The U.S. Treasury Department has warned bunker suppliers not to provide fuel to blacklisted Iranian vessels.

The Treasury's Office of Foreign Assets Control (OFAC) sanctions FAQ's now state that "non-U.S. persons that provide bunkering services for an Iranian vessel that has been identified as blocked property of an Iranian person on OFAC's List of Specially Designated Nationals and Blocked Persons — or that make related payments for these bunkering services — risk being designated themselves."​

The warning comes as part of US pressure on Iranian oil tanker Adrian Darya 1, previously named Grace 1, that last month become the centre of a diplomatic row when it was detained in Gibraltar.

Now released, the US then blacklisted the tanker on August 30.

It has now also come to light that the US state department then offered millions of dollars to the vessel's captain to sail the vessel to a port where it could be seized by the US.

Hin Leong on its own "will have no reasonable prospects of being restructured or rehabilitated," PwC said in its preliminary findings Tuesday.