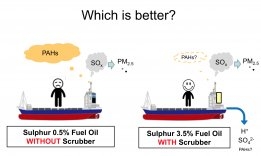 Japan has come out heavily in favour of open-loop scrubbing, telling IMO today that when both human health and the marine environment are taken into account, burning HFO with a scrubber is a better choice than simply burning 0.50%S fuels alone.

The key reason for this, they said, was due to the ability for scrubbers to remove airborne particulate matter (PM) and polycyclic aromatic hydrocarbons (PAH).

And in the presentation by the Ministry of Land, Infrastructure, Transport and Tourism (MLIT) at PPR 6, the delegation said its study had therefore concluded there is no scientific justification to prohibit use of the technology as long as the IMO's discharge criteria are met.

The Japanese position was seen among industry circles as a major win for scrubber advocates, with the technology coming under major pressure in recent months due to concerns over the impact scrubber washwater has on the marine environment.

To that end, the Japanese study focused on three areas, Seto Sea, Ise Sea, and Tokyo Bay, and looked at concentration levels of 21 different PAH's and eight heavy metals including Vanadium, Nickel, and Copper.

It then modelled what 10 years accumulated concentration of the substances would be under an assumed "worst-case scenario" that all ships were equipped with open-looped scrubbers and discharging wash water, and compared this with the actual 2015 levels.

"Japan concluded that either any short- or long-term effects on marine organisms cannot be caused by the use of open-looped scrubber," the delegation said.

The study also noted the concentrations of heavy metals in the washwater were 100 times less than the country's emission standard for on land sources.

Japan's findings come in contrast to China, Fujairah and Singapore who all recently announced bans on the use of open-loop scrubbers.

Those country's have yet to publicly present their respective studies on the matter.

Maersk signed a memorandum of understanding with Jordan's Ministry of Energy and Mineral Resources at the COP27 event in Egypt.