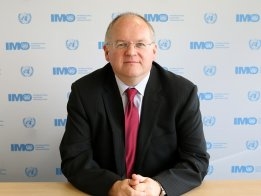 A key former IMO official who helped draft the UN body's initial strategy on greenhouse gases has said the shipping industry should consider nuclear energy as it seeks to eliminate its carbon emissions, arguing that supply infrastructure for ammonia and hydrogen bunkers may not arrive soon enough.

"We need to start talking about nuclear-powered ships -- the zero-emission solution," Edmund Hughes, who served as the IMO's head of air pollution and energy efficiency until February, said in LinkedIn comments last week.

The use of nuclear energy in shipping has thus far largely been restricted to military vessels and Russian icebreakers.

"Those proposing alternative fuels such as ammonia and hydrogen may not acknowledge it, but if we are to see zero-carbon ships enter the market in the 2030s, then those alternative fuels may not be the most appropriate route to that goal, not least when considering the supply infrastructure conundrum.

"Furthermore, those calling for zero carbon emissions from shipping by 2050 (not even by the end of the century) need to consider how the largest machines on the planet are going to be powered.

"It is suggested that small-scale Molten Salt Reactors need to be put on the table with the other alternative fuels for consideration.

"The pressure to take urgent action to address climate change demands it."

All four vessels are due for delivery in 2023.

Heavy distillate and residue stocks sank by 8.7% to 8.166 million barrels in the week to Monday.