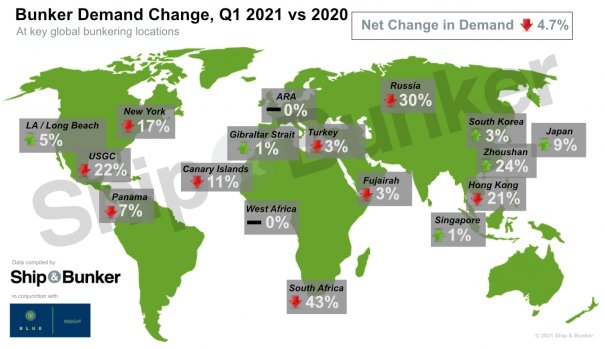 Demand at key marine fuel hubs dropped by 4.7% in the first quarter of 2021 from the IMO 2020 peak a year earlier, but climbed from the levels seen at the end of 2020, according to the latest market survey of bunker sales volumes in 17 leading global locations.

As in previous quarters, Ship & Bunker in conjunction with consultancy BLUE Insight surveyed bunker market participants around the world alongside official data where available and found an average drop of 4.7% in volumes in the first quarter from the same period of 2020. The year-on-year drop has eased significantly from the 9.4% fall seen in the fourth quarter of last year, and Q1 volumes sequentially were 2.4% higher than in Q4 2020.

"While container bunker demand appears to be setting records in most of the major container ports, the picture in non-container ports is not so rosy," Adrian Tolson, director of BLUE Insight, told Ship & Bunker on Tuesday.

"Other shipping activity, such as that involving bulk carriers and tankers, remains slow, and for some activity like cruise vessels is non-existent.

"This is creating major demand challenges in smaller ports and limiting the 'return to normal' in the bigger ports."

The drop from elevated levels early in 2020 during the IMO 2020 transition is 'a key factor to consider' in looking at the Q1 2021 numbers, according to Carsten Ladekjaer, CEO of Glander International Bunkering.

Looking at Q1 2021, it is of course also important to take note that we still have a pandemic affecting many ports and countries

"As we all learned, the markets were very much in flux at that time," he told Ship & Bunker by email.

"Looking at Q1 2021, it is of course also important to take note that we still have a pandemic affecting many ports and countries, so it will be exciting to see what will be the new normal down the road."

As with the previous surveys the areas covered by the survey are Singapore, the Amsterdam-Rotterdam-Antwerp (ARA) hub, Fujairah, the US Gulf, South Korea, Russia, the Gibraltar Strait, Hong Kong, Panama, Zhoushan, Japan, New York, West Africa, South Africa, the Canary Islands, Los Angeles/Long Beach and Turkey. For 2021 this group now includes Russia for the first time.

Together these areas saw just over 134 million mt of demand in 2020, meaning they cover around half of current global demand.

But because the areas covered by the survey include some of the top bunkering areas in the world, the global drop shown is likely to be less steep than that seen for total demand. The effect of demand tending to congregate at bunkering hubs last year has left the world's smaller ports with sharper declines.

The full breakdown of the survey results including sales volumes in each bunkering region for Q1 2021 and 2019 is available by clicking here.

"The market has continued to consolidate towards bigger industry players and larger flow ports," Ladekjaer said. That consolidation is driven by consumers being drawn towards firms like Glander that are well set up to cope with 'challenging market conditions', he argued.

Glander saw a gain of about 13% in its bunker volumes in the first quarter from a year earlier, Ladekjaer said.

Other firms have also sounded bullish at the start of 2021. Bunker supplier Monjasa told Ship & Bunker its sales had continued to rise in the first quarter after a record 2020, and KPI OceanConnect has said it expects to see average global demand growth of 3-5% this year.

It remains to be seen how quickly shipping demand will recover in the face of COVID-19 lockdown measures being eased this year. But with the IMO 2020 effect largely stripped out of the yearly comparisons from the second quarter onwards, the market should at least show some gains from the nadir of last year's crisis.