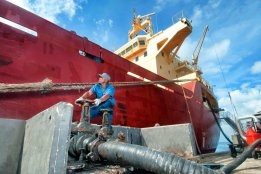 Curoil is the principal physical bunker supplier on the islands of Aruba, Bonaire and Curacao. Image Credit: Curoil

Erica Kirindongo has joined the company as a fuel trader in Curacao as of last month, she said in an update to her LinkedIn profile. She is responsible for both bunker and aviation fuel sales.

Kirindongo previously worked for data services company Dynata in Rotterdam, serving most recently as associate account director. She had earlier worked as an advisor for Dutch lender ABN Amro.

Curoil is the principal physical bunker supplier on the islands of Aruba, Bonaire and Curacao in the Caribbean. The firm supplies 180 CST and 380 CST HSFO, MGO, low-sulfur diesel, VLSFO and marine lubricants by pipeline, truck and barge, according to its website.

The company is looking for candidates who have been a key part of large-scale complex projects.

Call for Action on Underwater Noise From Shipping in Arctic

Current guidelines on underwater noise to be discussed at IMO sub-committee meeting this week.