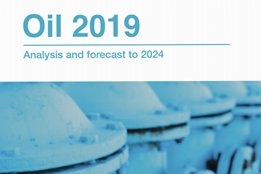 The International Energy Agency (IEA) today released its latest thinking on bunker fuel demand, noting again that the marine fuel landscape will alter dramatically in 2020 with the advent of the new global 0.50% sulfur cap for bunkers.

Headline numbers for 2020 are that MGO will be dominant fuel choice with 1.98 mb/d of demand; HSFO, currently by far the most popular fuel choice, will fall to 1.39 mb/d; VLSFO will see 1.01 mb/d of demand next year.

While VLSFO will be the cheapest compliant fuel available, IEA sees MGO as the more popular choice in part due to reduced availability of low sulfur blending materials to make VLSFO.

"Some shipping companies may also be reluctant to adopt a new fuel immediately, and would prefer to use MGO until they have confidence that VLSFO will be easily available in ports and stable and compatible with similar grades," IEA adds.

That dynamic is expected to equalize by 2024, at which point IEA sees VLSFO and MGO consumption being more or less equal.

non-compliance will not be a lasting phenomenon and unscrubbed (noncompliant use of) HSFO is seem falling to 0.30 mb/d in 2021

For HSFO demand in 2020, 0.68 mb/d will come from scrubber equipped vessels and 0.71 mb/d from non-compliance, the latter including both vessels that deliberately lift and burn high sulfur fuel to avoid paying for the more expensive MGO and VLSFO, and those vessels "forced" to use fuel oil due to a lack of availability of compliant fuel.

And while another factor in play is that enforcement of the new rules could "patchy" at the beginning, IEA says non-compliance will not be a lasting phenomenon and unscrubbed (noncompliant use of) HSFO is seem falling to 0.30 mb/d in 2021, 0.11 mb/d in 2022, and then to 0.06mb/d in 2024.

As for scrubbers, while there will be further retrofits in 2020 and 2021, IEA sees demand from scrubbers stabilizing after 2022.

"We assume that the business case for retrofitting existing ships with scrubbers largely disappears in 2021 as refiners increase gasoil output and amid competition for fuel oil from the power sector," says IEA.

IBIA Chairman: 'What We See is a Market That is in Flux'

"At IBIA, the overarching goals for the next 12 months mostly revolve around increased focus on ethics and transparency," chairman Tim Cosulich tells Ship & Bunker.

The combination of the hard sail and rotor sails could reduce the vessel's emissions by as much as 20% on average.