Alternative marine fuels designed to reduce greenhouse gas (GHG) emissions from shipping are still more expensive than very low-sulphur fuel oil (VLSFO), even after factoring in the cost of carbon and taxes.

Among the alternative fuels, methanol comes closest to competing with VLSFO on price

Average monthly CO2 prices have climbed fairly consistently since October 2020, with July 2021 the one exception. CO2 traded through the ETS averaged $95.7/t in January 2022, 135pc higher than January 2021, Argus data showed. But prices are still not high enough to incentivize ship owners to switch to low- and zero-carbon marine fuels.

Among the alternative fuels, methanol comes closest to competing with VLSFO on price. Burning 1t of methanol emits 1.375t of CO, less than half the 3.15t of CO2 released when burning 1t of VLSFO. But methanol has about half the heat content of VLSFO, thus requiring twice as much storage volume as VLSFO.

Adding CO2 cost and tax to January northwest Europe VLSFO puts it at $963/t, $74/t below the price of methanol with added CO2 cost (see chart). If methanol and VLSFO prices remain unchanged, CO2 would have to increase by 77pc to about $170/t for methanol to be priced at par with VLSFO. Biomethanol is even less feasible, with biomethanol priced 3.5 times higher than regular methanol in January in northwest Europe, Argus assessments showed.

Other alternative fuel options face their own challenges. 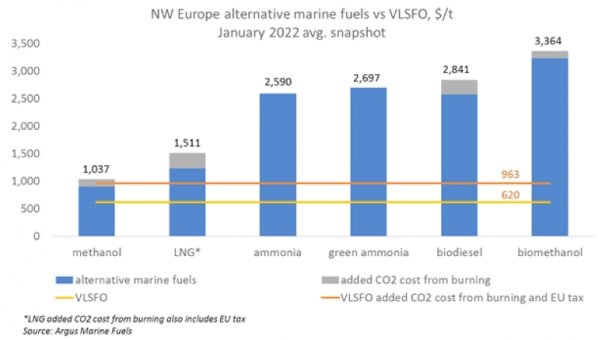 LNG looked promising as an alternative marine fuel until September 2021, when LNG prices flipped from a discount to VLSFO to a premium. This LNG price volatility has given some ship owners pause. Ship owners with vessels outfitted with dual-fuel engines capable of burning LNG and oil have switched to burning oil. For LNG bunker buyers with oil-linked term LNG contracts, the price spike has not been a deterrent.

The EU is mulling taxing LNG for bunkering at €0.6/gigajoule, about $37.4/t, in 2023. Considering CO2 emissions cost and tax, northwest Europe LNG was pegged at 1.6 times the price of VLSFO in January.

If ammonia and VLSFO prices were unchanged, CO2 price would have to jump to $1,724/t for ammonia to be at par with VLSFO

Burning LNG reduces CO2 emissions by 25pc compared with VLSFO, less than the CO2 reduction achieved from burning methanol and ammonia. For this reason, ship owner Maersk has dismissed LNG as a viable GHG reduction option.

Other alternatives fare even more poorly in the current pricing environment. At January price levels fatty acid methyl esters biodiesel was 2.7 times higher, ammonia was 2.7 times higher and green ammonia 2.8 times higher than VLSFO in northwest Europe, Argus data showed. If ammonia and VLSFO prices were unchanged, CO2 price would have to jump to $1,724/t for ammonia to be at par with VLSFO.

Another EU proposal, to be decided this year, would require ships calling at EU ports to reduce the average GHG intensity of their fuels by 2pc by 2025 and 6pc by 2030, rising gradually to 75pc by 2050 against a 2020 baseline. This proposal would apply to emissions generated during a fuel's life cycle, not just from fuel combustion. A 6pc reduction of GHG intensity by 2030 could potentially be achieved with a combination of new, fuel efficient engines and retrofitted vessel designs. But to get over the next goal line – dropping GHG intensity by an additional 7pc by 2035 – ship owners would have to utilize low-carbon fuels, at least in part.

EU's proposals are more ambitious than the International Maritime Organisation (IMO)'s targets. IMO is calling on vessels to reduce their CO2 emissions in international waters by 40pc by 2030 and by 70pc by 2050, from 2008 base levels. Some ship owners, including Maersk, CMA CGM, Hapag-Lloyd and Yang Ming, already surpassed IMO's 2030 targets in 2019 and 2020, leading environmental groups to question if the IMO's bar is set too low.

Starting in 2023, shipping companies operating in the EU waters would pass the CO2 and tax costs on to their customers

Starting in 2023, shipping companies operating in the EU waters would pass the CO2 and tax costs on to their customers, likely driving up prices of goods and services in the EU compared with other international regions. Some ship owners might modify their routes to spend less time in EU waters. Vessels entering and exiting the EU will not be able to avoid the CO2 charge. But they could avoid the fuel tax by bunkering in ports outside the EU.

The IMO allows for carbon capture and storage technology to be utilized on vessels to achieve its 2030 and 2050 goals. Marine exhaust scrubber manufacturers are working on developing scrubbers which will capture CO2 emissions, in addition to their original purpose – capturing sulphur oxide, nitrogen oxide and particulate matter. CO2-capturing scrubbers would allow shipowners to burn high-sulphur fuel oil and could put a damper on scaling up production of alternative marine fuels.