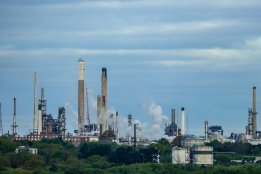 A method of removing sulfur from oil and gas which received backing at the research stage from the US government could prove to be an attractive proposition to suppliers to the marine fuel market in the light of tougher environmental regulation.

US firm TDA Research developed its catalyst-based system technology which is suited to small-scale producers in the early noughties. Taiyo Nippon Sanso (TNS) took a stake in US-based SulfaTrap which was set up in 2012 and incorporates the direct oxidation technology.

SulfaTrap's main focus has been in the stationary fuel cell market where it has developed and commercialized desulfurization sorbents that can reduce sulfur compounds to very low levels in natural gas and other hydrocarbons.

Keisuke Yamazaki, a Singapore-based executive with TNS, told Ship&Bunker that in the light of the 2020 sulfur cap for shipping, the marine market is an additional focus for the company.

Yamazaki said that refineries which produce transport fuel including diesel for the marine industry are among its major customers.

We deal with refineries and some marine fuel blenders: Yamazaki

"We deal with refineries and some fuel blenders for marine fuel," Yamazaki said. "Conventional treatment is becoming unviable for deep desulfurization," he added.

According to a US government case study, "the direct oxidation process provides a convenient and economical alternative for desulfurizing natural gas and gas associated with petroleum recovery, especially for small-scale applications (1-20 tons of sulfur per day).

"By enabling smaller producers to remove sulfur economically, the process can reduce energy consumption by about 30% and capital and operating costs by over 30% compared to conventional liquid redox plants," according to the case study.

Other benefits include a more streamlined system that requires a lighter maintenance burden.

A 0.5% global sulfar cap on bunker fuel (a big drop from its current level 3.5%) has presented ship operators with a number of possible responses. Many fear the price of low sulfur fuel oil will rise considerably when the rule change comes is applied from 2020 on the back of strong demand and short supply.

In addition, a glut of heavy residual fuel oil is predicted in the absence of marine demand post-2020.

HSFO Discount to Crude Narrows to Lowest Level of 2020

The Rotterdam HSFO barge discount to Brent crude prices has narrowed to an average of $6.17/bl in June.

The organisation has seen some recent BDNs where the supplier's declaration is not in compliance with MARPOL Annex VI.