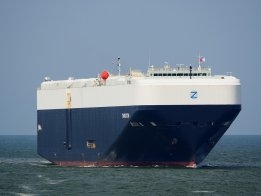 Car carrier Hoegh Autoliners is to have the first of a series of ships that are able to use ammonia as bunker fuel built in China.

China Merchant shipyard will build up to 12 pure car and truck carriers (PCTC) with the first two PCTCs delivered in 2024, according to maritime trade press reports.

Ship & Bunker reported in June that the company may go for a public listing to fund the newbuilds.

Ammonia along with hydrogen is an alternative bunker fuel that has been gaining ground within the shipping industry.

However, liquified natural gas as bunker fuel is the furthest ahead in terms of industry acceptance.

Polish Bunker Supplier Ship-Service to be Wound Up

The company's shareholders made the decision 'quite unexpectedly' on October 29, it said on Tuesday.