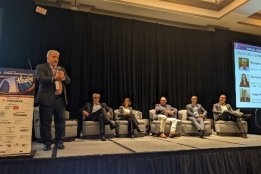 The issue came under discussion at a panel session at the IBIA Annual Convention 2022 last week. Image Credit: Ship & Bunker

The IBIA Annual Convention 2022 in Houston last week saw mixed views over the potential for the bunker-industry body to impose a code of conduct on its members.

At present, the organisation has a code of conduct that it encourages members to abide by, described on its website as 'an aspirational statement'. In his opening address at the convention last week, IBIA Chairman Tim Cosulich said a working group had been tasked with revising the document into a code of conduct.

"Then by default the members, by being members, commit to respecting that," Cosulich said.

The plan came under further discussion in a panel session on licensing, transparency and ethics, moderated by IBIA board member and maritime lawyer Steve Simms.

"What should that look like, and what is IBIA's role?"

The challenge for IBIA would lie in how to act as judge of the ethical standards of its members with limited resources.

The organisation's current code of ethics states its members 'only engage in business using compliant products'; but VLSFO with sulfur content slightly above 0.50% is often sold, accidentally or otherwise, and enforcing a code of conduct would require the body to investigate and make judgements in cases where this has happened.

Publicly censuring any members found to have broken the code of conduct could also expose the organisation to defamation lawsuits.

"I don't think IBIA is in a position to really force anything in any rigorous way against any players," Jason Silber, head of business development at Infospectrum, said in the panel session.

"Suspension from IBIA -- first of all, I'm sure a company would have something to say about that.

"They would probably fight that sort of thing, because it's their reputation at stake."

But in discussing the issue with Ship & Bunker at the convention, several industry figures said the need to improve standards was paramount, and that the industry should have a code of conduct it signs up to even if it cannot be enforced.

The firm is looking for candidates with at least five years of experience in a similar role.

The system is based on the thermocatalytic decomposition process, using a liquid catalysts to separate natural gas into hydrogen and solid carbon.