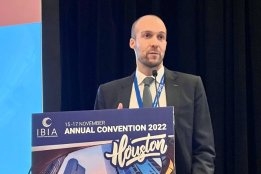 IBIA Chairman Tim Cosulich has set out the industry body's thee main goals over the coming years in an opening address at the IBIA Annual Convention 2022.

The industry body's focus will be on improving standards, lobbying for the introduction of supplier licensing and MFMs and decarbonisation, Cosulich said at the conference in Houston on Wednesday. He took over as IBIA chairman in April.

Cosulich said the industry's recent history had damaged its reputation.

"I think it is fair to say our industry has had its fair share of bankruptcies, frauds and reputational issues over the past seven or eight years," he said.

"I think it is important that we acknowledge that there is an issue, and that this issue is damaging the reputation of our industry."

IBIA's first step in working on ethics and integrity has been to task a working group with revising the organisation's code of conduct for its members.

The organisation will also lobby for supplier licensing to be introduced more widely among global bunkering hubs, Cosulich said.

"The licensing system will eventually be based on the introduction of mass flow meters," he said.

"We have the positive example of Singapore.

Cosulich's comments follow Ship & Bunker reporting last month that the Port of Rotterdam was preparing to make the use of MFMs mandatory for bunker supply within its jurisdiction. Singapore first introduced its MFM mandate in 2017.

The issues of licensing and MFM mandates are closely linked in the drive to improve the bunker industry's standards. A licensing system alone will achieve little in resolving quantity disputes without accurate measurement systems being mandated, and MFMs will work much better if reinforced with a licensing system that guarantees the systems are all calibrated the same way and have not been tampered with.

IBIA's third focus will see it put more resources into facilitating shipping's energy transition, Cosulich said. The organisation's future fuels working group has already been developing information for the industry on each of the alternative fuel options.

"Decarbonisation is really at the centre of every conversation that we have," he said.

"Our next efforts here will mostly be focused on port readiness."

The event will mark the first occasion the annual convention has been held in person since 2019.

But Julian Lee reminds colleagues that stockpiles are critically tight.