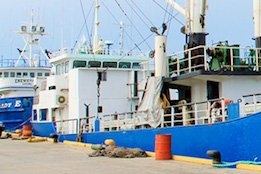 A coalition of Pacific Island and European countries will work together to urge IMO climate deal for shipping. Image: RMIPA

The Global Strategic Communications Council says ministers in a coalition of Pacific Island and European countries met in Tonga from April 24-28, formally agreeing to work together to ensure the International Maritime Organization (IMO) delivers an ambitious climate deal for shipping.

The group, known as the "High Ambition Coalition for shipping," includes the Marshall Islands, Tuvalu, Tonga, Germany, France, and Denmark.

"IMO has in the past been very slow, but a new hope for progress on GHG was initiated in 2015, when the government of the Marshall Islands decided to overcome its registry, in defence of its people, and call on IMO to set an ambitious target," said Nicolas Udrea, negotiator for France on GHG at IMO.

Specifically, the coalition intends to urge IMO to provide a contribution toward the Paris Agreement goal

Specifically, the coalition intends to urge IMO to provide a contribution toward the Paris Agreement goal of guarding temperatures to well below 2 degrees and aiming for 1.5 degrees Celsius.

"The science is clear - without immediate and rapid decarbonisation of this major and growing source of GHG, 1.5 degree stabilisation will not be achieved. RMI is host to the world’s second largest shipping registry," said Mike Halferty, Marshall Islands minister of Transportation and Communication.

"Many of our island neighbours here today also host registries of global significance. This means not only our islands have a unique responsibility to influence the ambition of the IMO, many of our government’s revenues are closely tied to a well-managed decarbonisation of the international shipping industry."

The firm is working with the Meyer Werft shipbuilding company to complete the construction of the cruise ship formerly known as Global Dream.