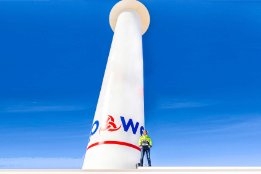 Rotor sail manufacturer Norsepower Oy Ltd this week said it has won the first newbuild order for one of its auxiliary wind propulsion systems.

With wind power technology practically absent from the modern fleet, the announcement marks another important milestone in the uptake of contemporary wind propulsion systems.

Norsepower hailed it as a first for the company, its previous orders being retrofit units, but in reality the order has a greater significance than that.

A report by Clarksons Research last month indicated there are only 7 vessels in the fleet fitted wth rotor sails, plus one on the order book. At this stage, then, every order has high significance for rotor sails' acceptance as a serious option for shipowners.

As expected, the press release accompanying Norsepower's announcement reiterated some of the key selling points of rotor sails: typical bunker (and associated emissions) savings of 5 – 20% and in some cases up to 25%; proven tech and is available now for newbuilds and retrofits.

But perhaps one of the biggest benefits of rotor sails, and wind power in general, is that they work in tandem with other propulsion systems - be they powered from traditional oil, LNG, or the hydrogen and other alternative fuels predicted to be used in the future.

With great uncertainly over exactly what the bunker fuels of the future will be, wind power is one of the few things likely to remain relevant in the years ahead.