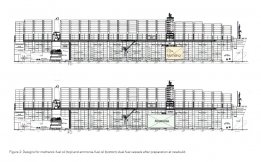 The estimates are based on a 15,000 TEU container ship. Image Credit: MMMCZCS

Adding the systems needed to run a newbuild ship on methanol or ammonia could add up to 16% to the construction cost, according to the Maersk Mc-Kinney Moller Center for Zero Carbon Shipping.

The research body published a report on its website on Thursday setting out the practical considerations for converting ships to run on green fuels, basing its estimates on a 15,000 TEU container ship.

Methanol or ammonia propulsion would add about 11-16% to the cost of a newbuild vessel of this size, according to the research.

Meanwhile converting one of these vessels to run on methanol would cost 10-16% of the newbuild construction cost, with this range increasing to 19-24% for ammonia.

"Methanol and ammonia have a lower calorific density than fuel oil, so they require larger tanks to provide the same range as fuel oil vessels." the organisation said in the report.

"As a result, converting to full range dual fuel vessels using our designs reduces cargo space by 240-610 and 530-1100 TEU for methanol and ammonia, respectively, with conversion of unprepared ships sacrificing most space.

"These cargo losses can cause a significant reduction in the earning potential of the vessel, so they must be carefully considered before planning dual fuel or conversion-ready vessels."