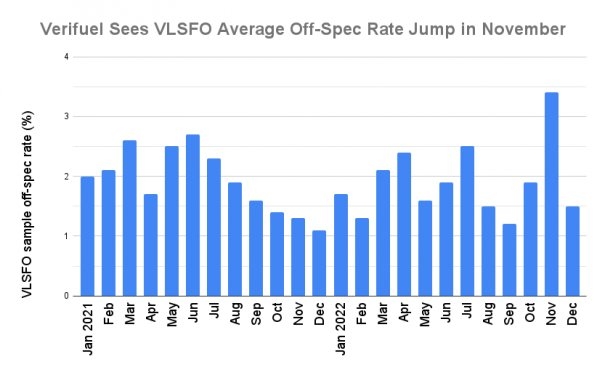 Within Q4 the off-spec rate was at its highest in November. Image Credit: Ship & Bunker / Data Credit: Verifuel

The share of VLSFO samples found to be off-specification jumped on both a yearly and sequential quarterly basis in the fourth quarter of 2022, according to Bureau Veritas bunker monitoring unit Verifuel.

Within Q4 the off-spec rate was at its highest in November, at 3.4%, with the level in October and December reaching 1.9% and 1.5%, respectively.

An increase in quality problems may have been caused by the aftermath of the Russian invasion of Ukraine, with middle distillates now much harder to come by and more experimental blending components likely to be used. Singapore saw HSFO contamination problems in February and March of last year, and a similar situation emerged at the Amsterdam-Rotterdam-Antwerp hub over the summer.

The five 9,000 CEU vessels will by built by China Merchants Heavy Industry (Jiangsu).