Onboard Production Of Hydrogen Bunkers Explored in New Wärtsilä Partnership 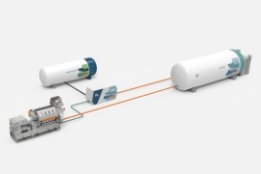 The gas reformer produces hydrogen from natural gas for use as engine fuel, while the CO2 produced is captured and stored onboard. Image Credit: © Wärtsilä Corporation

The production of hydrogen bunkers onboard vessels is being explored by a new partnership that counts Wärtsilä, RINA and ABB among its participants.

As a non-carbon-based energy source, hydrogen in tipped to play a major role in the future marine fuel mix, but difficulties in the commercially viable production of green hydrogen, along with its distribution and onboard storage, is currently a significant barrier to uptake.

The partnership, that also includes the Liberian Registry and an unnamed energy major, say that by producing hydrogen onboard using LNG, a hydrogen bunker-based fuel solution not only becomes more viable but a solution can also be delivered in a much faster time than would otherwise be possible.

“Our gas engines are already able to use mixtures of hydrogen and LNG, and our future efforts will be to reach 100% hydrogen fuel,” says Lars Anderson, Director, Product Management & Sales Support, Wärtsilä Marine Power.

The concept is based on combining LNG with steam to produce hydrogen and CO2. The hydrogen produced will be used directly in a mix with natural gas in internal combustion engines or in fuel cells, thus eliminating the need for hydrogen to be stored onboard.

The CO2 will be liquefied using the cryogenic stream of LNG that would be used as fuel anyway, and later disposed ashore for carbon storage. Tankers can use the stored CO2 as inert gas during discharge.

It is envisaged that the necessary equipment would easily fit on the deck of a commercial vessel.

No additional bunkering infrastructure beyond LNG bunkering will be required.