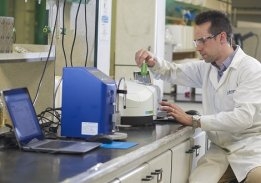 Tests being conducted at a Lubrizol facility. Image Credit: Lubrizol

It is not only ship owners who are having to adapt to shipping's rapidly evolving fuel market. So too are the lubricant and additive companies developing new cylinder oils to accommodate emerging fuels. With the introduction of new lubricant chemistries, established testing processes are evolving.

The testing challenge is illustrated by the development of lubricants for IMO 2020 and the very low sulphur fuel oil (VLSFO) blends and distillate fuels that have now replaced high-sulphur heavy fuel oil (HFO) on many vessels. As well as underlining the investment in testing needed to guarantee high-quality lubricant performance, these issues also show the need for lubricants and lubricant additives that target the specific challenges inherent in new fuel types.

The development process for new cylinder oils is well defined. Once a solution has been identified, it goes through stringent testing before engine designers approve the new product. The details depend on the engine designer but always comprises initial bench testing and evaluation (with formulation adjustment and further bench testing as required) followed by engine testing and finally approval trials in a vessel. The engine designer's engineers are present at the start and end of tests to conduct critical measurements.

Testing at Every Stage

"Bench testing is a good indicator of individual performance attributes. The controlled environment of a test engine provides further proof of performance to both the OEM and potential ship owner partners. Field trials show real-world performance and are a requirement for product approval."

The steps before engine trials - bench test, adjust, repeat – provide critical early indications of a new lubricant's performance. But according to Brice it is exactly this stage that new fuels are reshaping. Many of the established bench tests need to be modified or replaced to accommodate new fuel characteristics.

"The current bench tests are aligned with incumbent cylinder lubricant chemistries and have been good screeners for products for HFO. For distillate fuels and the new IMO 2020 VLSFOs we have seen different performance needs which the existing tests either cannot discriminate for or do not allow to be evaluated."

With distillate fuels, for example, several lubricant formulations currently available perform well in high-temperature deposit tests (such as the Komatsu Hot Tube or panel coker). But when it comes to engine performance, there have been reports of high levels of deposits on piston rings backs and grooves.

"This suggests there is another aspect of performance required of cylinders oils for use with distillate fuels that the current bench test methods don't identify," Brice notes.

It is a similar story with VLSFO. Previous research by Lubrizol had already highlighted that these new fuel blends require greater protection from deposit formation than for established low-sulphur fuels. Lubrizol developed a solution that uses dispersant additives that have not been used in marine diesel cylinder oils before. These afford strong deposit control properties without the basicity that more traditional detergents would bring - ideal for use with low-sulphur fuels such as VLSFOs that can still carry a risk of causing asphaltene deposits.

The new fuel and lubricant chemistries did not yield the results expected in initial lab testing.

But the new fuel and lubricant chemistries did not yield the results expected in initial lab testing. The deposit control capability of dispersants is well proven in other industries, so Lubrizol expected that its new package – containing both detergents and dispersants – would perform well. But in early tests using a panel coker, a BN40 cylinder oil containing dispersants appeared to leave more deposits than a BN40 cylinder oil without dispersants. However, after 100 hours in a test engine, it was clear that the oil with dispersants was outperforming its counterpart. Subsequent field testing has confirmed the performance of the new formulation.

Both examples show that it is essential to improve on current bench tests. There are several modifications that can lead to more accurate laboratory results. Pre-aging the lubricant, or adding synthesised deposits or fuel to the oil, can improve the correlation between conditions in the engine and the lab. Reviewing the test profiles themselves is also important to ensure that they can closer represent modern engine demands, for example by adjusting test duration and temperature. In the end though, bench tests are designed to give early indications of performance and there is no substitute for testing new lubricant formulations in an actual engine.

"This is why the test engine is really important in the development cycle," says Brice. "As valuable as bench testing is, it can never tell the full story."

The development work towards Lubrizol's robust BN40 package highlights the importance of a testing regime that is tailored to fuel characteristics and balances laboratory work with test and field engine experience. As other fuels emerge – for example, the biofuels or hydrogen-based fuels that could help shipping reduce its emissions - further changes in lubricant chemistry are likely to require more adaptations to the testing process.

"It is difficult to predict the challenges that these future fuels will bring due to limited availability and difficult handling in lab environments," says Brice. "The operating conditions could be very different for engines using these fuels with the formation of different combustion products that will need new lubricant additives, but we will need in-field testing experience to fully understand the challenges. This could take several years to gain."

One thing is clear; with new fuels come new challenges for engine condition and new demands on lubricant performance. Recent experiences with VLSFO and distillate fuels highlight the need for lubricant additive packages tailored to the challenges of specific fuel types.

It can take up to five years to develop a new cylinder oil product, with around 80% of that time devoted to testing. With pilot projects already under development for several new potential fuels, now is the time for lubricant and additive companies to begin looking at how the next generation of cylinder oils will be developed and tested.

Ships loading and unloading cargoes at the terminal can now take LNG bunker deliveries by barge at the same time.