Sovcomflot: LNG Is "A Promising Fuel" for Large-Capacity Vessels 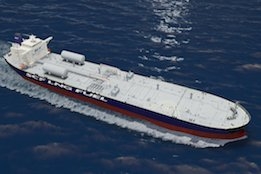 PAO Sovcomflot (SCF), at last week's Gastech 2017 in Tokyo, suggested liquefied natural gas (LNG) is "a promising fuel" for large-capacity vessels that will significantly increase their environmental compatibility and efficiency.

The company further asserts that "the future of tanker industry belongs to LNG-fuelled vessels."

Sergey Frank, President and CEO of SCF, speaking at the event, said: "Aframax is one of the key size categories for tankers employed in transportation of liquid hydrocarbons. These are ships that are most in demand to cater for Russian oil exports."

"Sovcomflot and Shell are initiating the conversion of this segment of large-capacity tankers to gas engine fuel. Sovcomflot aspires to become a leader in the global transformation of maritime transport towards more efficient and environmentally friendly systems and technologies," said Frank.

"The market is set a new standard of navigation safety and quality, which is especially important for the operation of ships in environmentally vulnerable areas of the world ocean."

As Ship & Bunker reported last month, the newbuild vessels under the SCF order, which are said to be set to become the world's first LNG-fuelled Aframax tanker newbuildings, will be supplied with LNG bunkers under a supply agreement with Shell.

But Bill Smead still defends the commodity as a good investment.

Daniel Rose, former CEO of brokerage LQM, will serve as the company's CEO.