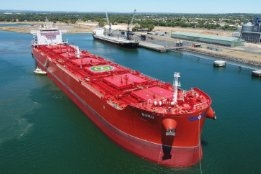 Klaveness Combination Carriers (KCC) is the latest operator to announce a trial of biofuel bunkers  as part of industry-wide decarbonisation efforts.

With the cost of renewable fuels much higher than conventional fossil oil fuels, the use of biofuel blends is currently common practice.

KCC said it used a 30% biofuel blend for the trial.

The company also noted the trial was carried out as part of its efforts to gain technical and commercial experience with biofuels ahead of the intended implementation of the EU Commission’s FuelEU Maritime legislation from 2025.

Announced earlier this year, the proposed regs aim to establish a carbon intensity standard for ships, and would require them to show that their bunker fuel is of a certain percentage below a yet to be decided carbon baseline.

“We are pleased with the outcome of this test and will continue exploring biofuels possibilities going forward," said KCC CEO, Engebret Dahm.

"We believe biofuel will be an increasingly important measure over this decade for the shipping industry to reach its carbon reduction targets."

Biofuel bunkers have proven popular with owners and operators as they are typically "drop in" fuels that can be blended with conventional fuels, and can be used in today's ships without modification to their existing conventional fuel systems and engines.

The company plans to triple ammonia throughput capacity at its Rotterdam import terminal to 1.2 million mt/year by 2023.

As part of a move to 'green' vessels sailing under the Singapore flag.