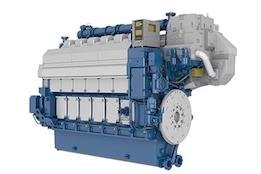 Each of the four 174,000 cubic metre (cbm) capacity vessels will be fitted with four Wärtsilä 34DF dual-fuel generating sets that will be primarily powered by LNG fuel to provide the ships with auxiliary power - each providing a total power output of 56 MW.

"The order also confirms our growing presence in China and our ability to serve the Chinese market."

Wärtsilä says the 34DF engine was selected for the four ships because of their reliability, efficiency, and economic fuel consumption.

Delivery of the engines to the yard is set to begin in the second half of 2018, while the vessels are slated for delivery starting in 2019.

In January, Wärtsilä announced that it had signed a Letter of Intent (LOI) with ENN (Zhoushan) LNG Co. (ENN) to supply Wärtsilä 34DF dual-fuel main engines for an 8000 cbm LNG bunkering vessel.

LNG will not be able to meet the IMO's 2050 target, according to Gaslog Chairman Peter Livanos.