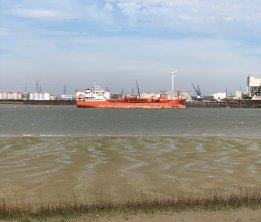 Liquified natural gas leads the field in terms of visible bunkering infrastructure for alternative bunker fuel for ships with other alt fuels lagging behind, according to market analyst Luke Gear.

Gear, of IDtechEx, told a webinar last week that there were 488 local storage points for LNG compared to 195 for ammonia and 118 methanol. Hydogen had no comparable facilities, he said.

While ammonia is a transported and traded commodity and therefore has a basis for commercial expansion into the maritime sector, green ammonia does not.

According to Gear, 75 million mt of green ammonia would be required to meet 30% of the current demand for marine fuel.

75 million mt of green ammonia would be required to meet 30% of the current demand for marine fuel.

Gear said that the market presence of fuel-cell driven shipping power (using green ammonia and hydrogen as fuel) would grow but not in the short term.

Fuel cell deliveries by vessel type over a five-year period (2019 to 2024) "are dominated by a few large mega-watt orders".

However, if green ammonia feedstock and solid oxide fuel cell technology become more widely available, this could change, according to Gear.

Meanwhile, the efficacy of the EU sanctions continues to be questioned.