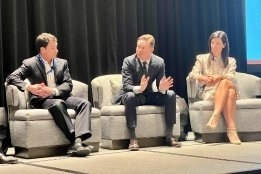 Bunker demand from container lines may be down by as much as 20% on the year as the boxship segment struggles with a weakening market, according to commodity trading firm Hartree Partners.

"One of the key things I'm seeing from a bunker-market perspective is the demand data we're seeing from the liners is pretty bad," Holm said in a panel session at the conference.

"The liners -- the Maersk, the CMAs of this world -- it's weak, it looks really bad.

"Only from the liner sector -- they're big lifters at some of the big bunker ports -- we've seen some of them down 20%."

"I think ultimately it comes back to inflation."

AP Moller-Maersk saw its bunker consumption drop by 4.8% in the third quarter from a year earlier. Hapag-Lloyd's demand slipped by just 1% in the same period.

Container throughput at the Port of Rotterdam was down by 8.6% on a tonnage basis in the third quarter.

The equipment can pay for itself within a few months, according to engineering company Hydrex.

The firm will install a 6.6kV shore power connection on board one of its tankers currently under construction in China.