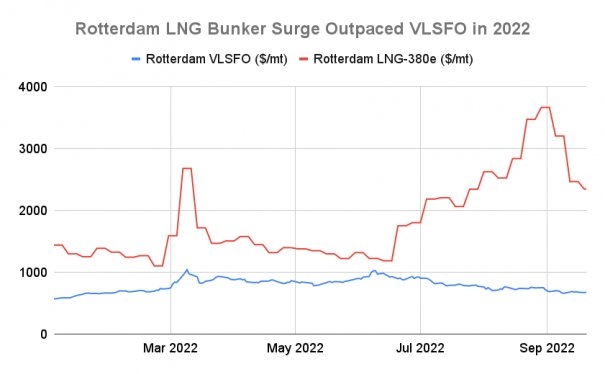 The UCL Energy Institute published a report earlier this week suggesting hundreds of billions of dollars of investments in gas-powered shipping could be left as stranded assets in the coming decades.

The report suggested that bio- and synthetic LNG -- which operators of gas-powered tonnage hope to switch to from fossil LNG as these alternatives become available -- will not be competitive on price with other synthetic fuels like ammonia.

This assumption is not well-founded, SEA-LNG argued in an emailed statement on Friday.

"Their analysis is based on an assumption that the decarbonisation pathway offered by LNG via bio-LNG in the medium term to synthetic, or e-LNG, in the long term, will be less 'competitive' than ammonia or other electro-fuels," SEA-LNG said in the statement.

"This is highly problematic for a number of reasons.

"This can only be produced from renewable energy sources which will take years to develop to the necessary scale.

"Suggesting a particular electro-fuel will 'win' based on price, is reckless and is, at best, a guess at this point in time."

Bio- and synthetic LNG are widely assumed to become available in the coming decades, but little sign has yet emerged of them appearing at scale in the short term.

This problem is not unique to LNG's alternatives -- large-scale production of green ammonia and methanol also appears to be at least several years away.

In the nearer term, the price of fossil LNG is a more immediate problem. The price of LNG bunkers in fuel oil terms at Rotterdam has gained 491.2% since the end of 2021, according to Ship & Bunker prices, while VLSFO at the Dutch port has risen by 15.7%.

The firm has selected eight trainees for the programme after holding seven global recruitment events.

The Mediterranean country is already receiving LNG for the Delimara Power Station complex at Marsaxlokk.

The firm's series A funding round closed this week with investments led by Chevron New Energies as well as support from US shipping and logistics company Crowley.