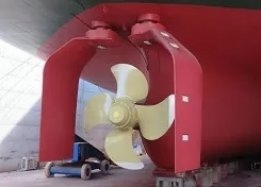 The researchers are now determining whether the system is ready to be retrofitted to a 90m coastal cargo ship for a more extensive trial. Image Credit: University of Strathclyde

Researchers at the University of Strathclyde in Scotland have developed a new rudder design that they claim can deliver fuel savings of 15% in calm waters.

The university's GATERS project has developed a new propulsion and steering system which it calls the gate rudder.

"Unlike a traditional rudder which sits behind a ship's propellers to steer the vessel, the U-shaped gate rudder – essentially two separate rudders – sits astride the propeller which, as a result, acts like a nozzle around the propeller and generates additional thrust," the university said in a statement on its website on Tuesday.

"Both rudders can be independently controlled to provide steering better as well as helping vessels move sideways – called crabbing – when docking, for example."

The researchers are now determining whether the system is ready to be retrofitted to a 90m coastal cargo ship for a more extensive trial.

The company is looking for candidates with at least three years of experience as a bunker trader.

Former IMO official Edmund Hughes points out objections to the possibility of the UN body including a full well-to-wake emissions analysis in its regulations.

Official IMO data for 2021 shows global demand 3.8% over 2020's levels, with strong gains for all shipping segments except tankers.