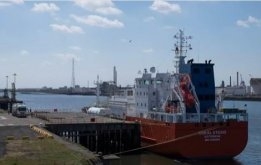 The firm developed the UK's first LNG bunkering facility at Teesport in 2015, and is now developing delivery systems for liquid hydrogen as a bunker fuel.

The UN COP26 event is being hosted in Glasgow in November.

"Liquid hydrogen has long been used to safely and successfully send rocks into space," Steven Lua, CEO of Unitrove, said in a statement last week.

"The technology is mature, but the markets for its use are not.

"We already see very early signs of light-duty vessels being battery-driven or powered by compressed gaseous hydrogen, but liquid hydrogen will allow us to serve the heavier portion of the shipping fleet where we hope to have a much larger impact."

The firm is also looking into systems for ammonia as a bunker fuel.

Meanwhile, the EU could impose a Russian oil ban by end of this year.