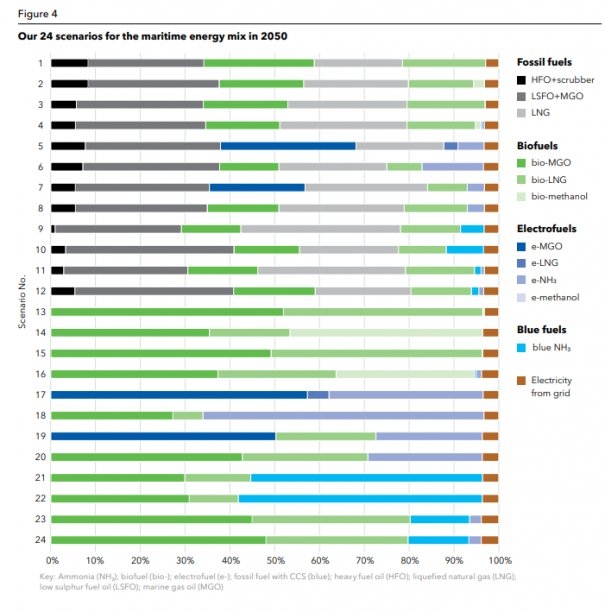 Classification society DNV has published the latest version of its annual Maritime Forecast to 2050 report, with fossil fuel demand remaining in significant quantities in half of the scenarios it envisages.

The report includes 24 scenarios looking at the potential bunker fuel energy mix in 2050. In 12 of these fossil fuel demand -- taking in heavy fuel oil with scrubbers, low-sulfur fuel oil, MGO and conventional LNG -- remains in 2050, taking up at least 50% of demand.

"Significant uncertainties around several factors influence our projected energy transition from conventional to carbon-neutral fuels," the organisation said in the report.

"Considering these uncertainties, which preclude developing a single 'most likely' projection, we have developed and provide a set of scenarios.

"Each describes a possible development of the future fleet composition, energy use and fuel mix, and emissions to 2050, under a particular set of framing conditions, and without prejudging the likelihood of these conditions."

While the organisation does not set out which of the scenarios is the most likely, the fact that it has included fossil fuels in half of them indicates a significant chance of these fuels remaining in the energy mix for decades to come.

"It is hard to identify clear winners among the many different carbon-neutral fuel options given the uncertainties on price and availability, but we can outline under what conditions each will proliferate," the organisation said.

"Bio-LNG, bio-MGO and bio-methanol, which are relatively energy-dense hydrocarbons, would be the preferred fuels, given sufficient availability of sustainable biomass.

"The uptake of bio-methanol is very sensitive to the production cost compared with bio-MGO and bio-LNG.

"With low availability of sustainable biomass, the prices of biofuels will likely be uncompetitive with those of electrofuels and blue fuels.

But FGE thinks the sector is still moving "fundamentally" in the right direction.