IMO2020: Only ONE Top Ten Box Carrier is Not Opting for Scrubbers 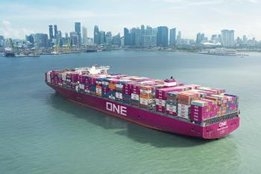 ONE not installing scrubbers for 2020. Image Credit: ONE

Only one of that world's top 10 box carriers will not fit scrubbers to its fleet for the start of IMO2020, according to the latest data from Alphaliner.

Japanese container shipping company Ocean Network Express (ONE) is the only player opting to use low sulfur fuel exclusively for compliance when the global 0.50% sulfur cap on marine fuel comes into force from January 1, 2020.

ONE is the world's sixth largest carrier by capacity, according to Alphaliner data, and says it still studying the feasibility of using the technology.

"MSC leads the pack with confirmed orders for about 250 scrubbers, followed by Evergreen with some 150 units and Maersk with about 140, including both on owned and chartered ships," Alphaliner says in its latest Weekly Newsletter.

Ship & Bunker data shows during the last month the average premium for VLSFO over IFO380 was $215/mt across the four major bunker ports of Singapore, Rotterdam, Fujairah and Houston. This lowers to $170/mt when expanded to 20 key global bunker ports.

With IMO2020 now less then 60 days away, Alphaliner believes bunkers prices at these levels will put ONE at a disadvantage compared to its peers.

"With the price for 0.5% low sulphur bunker fuel currently trading at a premium of about $200/ton over heavy fuel oil, carriers that do not have scrubbers installed will bear a heavier burden from increased fuel costs as of 2020," it says.

"ONE in particular will be exposed to the higher cost of low sulphur fuel, due to its reluctance to move ahead with scrubber orders."

Thousands of VLSFO blends have been tested, with none showing higher aromatic content than HSFO.