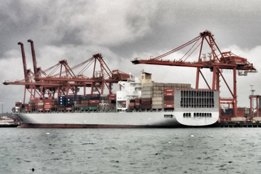 Scrubber retrofit activity in the run up to the new 0.50% sulfur cap on marine fuel has now taken 100 containerships out of action.

As at October 29, 86 vessels are at yards for scrubber retrofits and at least 14 are awaiting slots, according to the latest data from Alphaliner.

As Ship & Bunker reported in August, reports have indicated that retrofits have been taking longer than initially expected.

For box carriers, Alphaliner says this has lead to some vessles waiting at anchor for two to three weeks.

"With more than 500 containerships still scheduled to be retrofitted over the
coming twelve months, the current yard congestion problems are expected to
last for some time, well into next year," Alphaliner added in its weekly intelligence report.