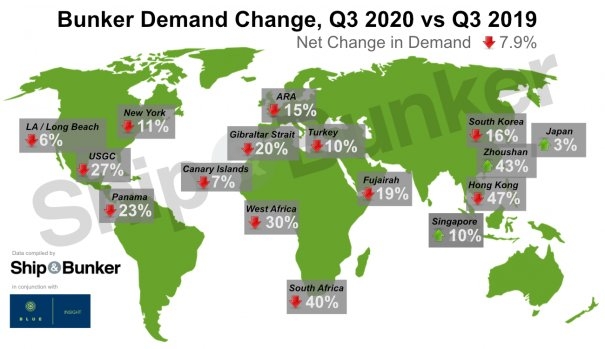 - Q3 bunker volumes down on average 7.9%
- An improvement over Q2's decline of 9.3%
- Figures show continuation of a shift in global demand to Asia
- Some ports see big gains, others witness huge drops

Demand at marine fuel hubs dropped by just under 8% on the year in the third quarter as ports started to recover from the worst of the COVID-19 crisis, according to a market survey of bunker sales volumes in 16 leading global bunkering locations.

The figures continue to underline that the damage done earlier in the year has yet to be repaired.

Ship & Bunker, in conjunction with consultancy BLUE Insight, has surveyed bunker market participants around the world and found an average drop of 7.9% in the third quarter from the same period of 2019. It represents an improvement over Q2's decline of 9.3%.

This represented an average gain from the second quarter at the nadir of this year's market of 1.6%

The changes from last year in individual regions varied widely, ranging from Zhoushan's gain of 43% to Hong Kong's drop of 47%.

"It's clear that the figures continue to underline that the damage done earlier in the year has yet to be repaired."

Together these areas saw just over 30.5 million mt of demand in the second quarter. On an annualised basis that would mean these areas cover around half of current global demand.

But because the areas covered by the survey include some of the top bunkering areas in the world, the global drop shown is likely to be less steep than that seen for total demand. The effect of demand tending to congregate at bunkering hubs this year has left the world's smaller ports with sharper declines.

The full breakdown of the survey results including sales volumes in each bunkering region for Q3 2019 and Q3 2020 is available to subscribers by clicking here.

The figures show a continuation of the shift in global demand to Asia. Strong gains were seen in Zhoushan and Singapore, and a smaller rise in Japan.

Singapore is where we experienced the most significant rise on the demand side during Q3.

"For Monjasa, Q3 2020 was impacted by growing volumes and a balanced supply and demand reflecting the widespread acceptance of VLSFO as the prevailing marine fuel option across all markets," the spokesman said.

"However, the Port of Singapore is where we experienced the most significant rise on the demand side during Q3."

The main exception to gains in Asia was Hong Kong, where new COVID-19 containment measures brought in at the end of July contributed towards a 47% slump in bunker demand on the year in the third quarter.

The measures required vessels arriving at Hong Kong for bunker-only calls to quarantine for 14 days before receiving their fuel, driving much of this demand to other ports in Asia. Much of Zhoushan's 43% surge on the year is likely to have come from this move, as well as some of Singapore's 10% gain.

For most of the rest of the world, the slump relating to COVID-19's effect on the shipping industry this year remains the biggest factor in the market.

You need to be agile and be able to scale your business up and down and do whatever it takes.

"The decrease in demand due to the COVID-19 pandemic varies from region to region, and we see huge differences" Peter Zachariassen, CEO of Bunker One, told Ship & Bunker by email Monday.

"Some markets remain unchanged, while others are seeing a decline of up to 80% in volume.

"In order to meet the weakening demand, you need to be agile and be able to scale your business up and down and do whatever it takes.

"This may require some tough calls, but they are necessary."

The early signs from Q4 are that demand has further improved, but again the final picture is likely to be one of a fragmented recovery with contrasting winners and losers from region to region.

"We can only hope this is backed up by the figures at year-end," Tolson said.

"If the bunkering industry can get away with losing something less than 10% of total demand, then we should all be very happy."

For 2021, while there will be no IMO 2020 boost for bunker margins, there is already cautious optimism for the year ahead.

"With the first COVID vaccines now being rolled out there is a growing belief that there are better days ahead, and that is reflected in the rising oil price, which in turn has lifted bunker costs some 28% since the start of November," said Martyn Lasek, managing director of Ship & Bunker.

"Of course, the impact of rising demand and bunker prices on credit and liquidity will be one of new unknowns the industry faces in the coming year."

Agunsa currently offers bunkers at 12 Chilean ports by barge, truck or pipe, and at Buenos Aires by barge.

The unnamed ship was arrested on Friday morning about 11 nautical miles to the east of Tanjung Penawar.