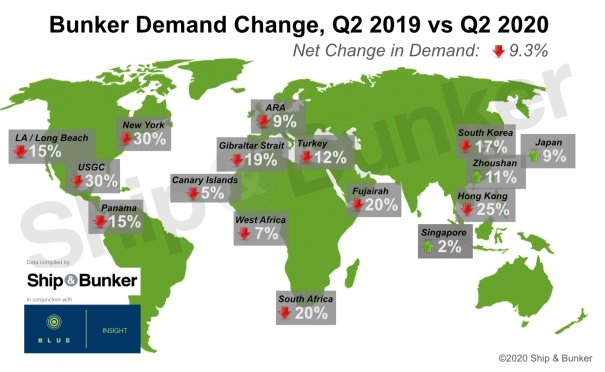 Demand at marine fuel hubs sank by just over 9% overall in the second quarter at the peak of the COVID-19 crisis, according to a market survey of bunker sales volumes in 16 leading global bunkering locations.

Ship & Bunker, in conjunction with consultancy BLUE Insight, has surveyed bunker market participants around the world and found an average drop of 9.3% in the second quarter from the same period of 2019.

The survey results tally with Ship & Bunker analysis from March estimating that demand might be down by around 8%.

But the decline was much sharper in some parts of the world, and the overall total was held up by gains in some parts of Asia. Some of the biggest declines were in the Americas, with New York and US Gulf falling as much as 30%. The biggest gain was Zhoushan's demand advancing by 11%.

The second quarter was pretty depressing.

"Although there appears to be resilience in some of the key bunkering ports in the world, particularly those that have benefited from container service consolidation like Singapore and the ARA.

"It seems, as we suspected, that the smaller ports would suffer more than bigger ports."

Together these areas saw just over 30 million mt of demand in the second quarter. On an annualised basis that would mean these areas cover more than half of the 221 million mt/year the International Energy Agency cites as global bunker demand for 2019.

But because the areas covered by the survey include some of the top bunkering areas in the world, the global decline shown is likely to be less steep than that seen for total demand. The effect of demand tending to congregate at bunkering hubs this year has tended to leave the world's smaller ports suffering more greatly.

The full breakdown of the survey results including sales volumes in each bunkering region for Q2 2019 and Q2 2020 is available to subscribers by clicking here.

The slump in economic activity following COVID-19 reaching pandemic status can be blamed for most of the decline, according to Morten Eggert Troen, senior vice president at Dan-Bunkering.

Regionally we saw a single-digit decrease in Asia and Europe, and a slightly higher decrease in Africa, the Middle East and the Americas.

"In all regions we experienced a slowdown in volume; regionally we saw a single-digit decrease in Asia and Europe, and a slightly higher decrease in Africa, the Middle East and the Americas," Troen told Ship & Bunker by email.

"The main reasons for the reduction in volume, can be attributed to the COVID-19 pandemic, which impacted the global trade negatively, as the consumers withdraw from the markets due to the future financial uncertainty.

"At the same time, we saw the cruise segment simply vanish from one day to the other. For obvious reasons, consumers' willingness to explore the world was dramatically reduced as they opted to stay home and stay safe.

"Finally, even for the remaining transport requirements, whether it is of goods, cargoes or people, the ability for companies to operate efficiently was challenged due to new safety measures, often forcing a strong slowdown in turnarounds."

On the more positive side, the second quarter also brought with it an end to the initial instability of IMO 2020, according to Monjasa.

We started seeing much more balanced markets in terms of supply and demand by early April.

"Following a highly volatile Q1 where supply logistics were stretched to the maximum due to IMO 2020, we started seeing much more balanced markets in terms of supply and demand by early April 2020," a Monjasa company representative told Ship & Bunker.

"From this point, VLSFO became a well-accepted new commodity, while HSFO demand outside of the greater shipping hubs and busiest waterways was declining.

"At Monjasa, we have seen around 90% of our delivered global fuel oil volume represented by low-sulphur products and around 10% HSFO since the start of Q2 2020."

The main regional trend emerging from the market survey is the strength in Asia, with Singapore, Zhoushan and Japan seeing volumes growth of 2%, 11% and 9% respectively.

This growth in market share is coming at the expense of areas with sharper declines, such as the US Gulf and New York losing 30% of their volumes compared with Q2 2019.

All of the EMEA areas on the list saw volumes falling, with the biggest drop in South Africa with a 20% decline. The Canary Islands put in the strongest EMEA performance with just a 5% drop on the year.

Notable by its absence in the list is Russia; its main bunkering areas in the Baltic, the Black Sea and the Russian Far East would have been mainstays of lists of this kind in the past.

But with the shipping industry largely moving on from high sulfur fuel oil to very low sulfur fuel oil -- of which Russia is not such a big producer -- its ports have become less competitive and some areas reportedly saw declines of as much as 75% in the second quarter.

The firm is seeking to hire a 'green solutions architect for the shipping industry'.

Tolson argues independent suppliers have not changed their models notably since a period of 'profit at unprecedented levels' in the mid-2000s.