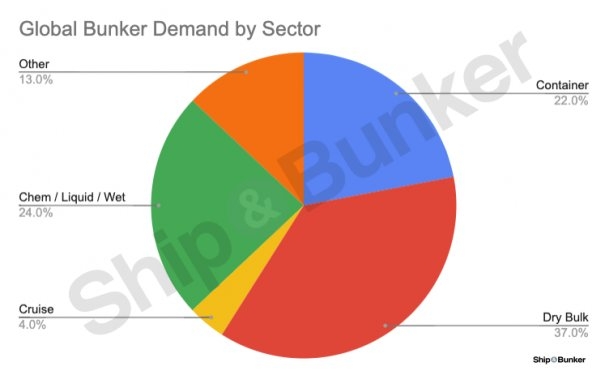 Declines in container and dry freight will be the main driver behind reduced bunker demand. Image Credit: Concawe / Ship & Bunker

While there has been abundant anecdotal evidence of a shipping slowdown because of the COVID-19 pandemic, little clear data has yet emerged on how this incident is affecting bunker demand.

With some sectors under pressure, others getting a boost, Ship & Bunker estimates demand could currently be down by as much as 8% worldwide.

Supply chains are in disarray, factories are shuttering production in some parts of the world and the cruise industry is at serious risk of all but grinding to a halt for the rest of the year.

In terms of exact data on bunker demand, all we currently have to work with is sales figures from Singapore's Maritime and Port Authority showing a month-on-month decline of 14.1% from January to February, but a yearly gain of 2.6% from February 2019.

That monthly decline is only slightly higher than the linear average January-February drop of 12.4% over the past decade.

BIMCO believes that bunker sales will take a hit too -- like other transport fuels -- but not to the extent of what we see for jet fuel.

"BIMCO believes that bunker sales will take a hit too -- like other transport fuels -- but not to the extent of what we see for jet fuel," Peter Sand, the industry body's chief shipping analyst, said by email Wednesday.

"Bunker sales in Singapore drop seasonally in February from the January high -- but we expect the drop is larger due to low demand."

The cruise industry is the most obvious casualty of the pandemic among shipping segments; high-profile outbreaks on some vessels and the general advice to avoid being in close contact with other people have brought much of the industry to a standstill.

We have the most concrete evidence here of disappearing bunker demand, with ships being banned from calling at several ports for much of this year's cruise season.

Refining industry body Concawe estimates cruise ships have a share of about 4% of the global 300 million mt/year bunker market, and one can expect consumption here to have dropped to close to zero at present.

Concawe estimates the container segment at 22% of global bunker demand.

Offline container capacity is currently around 10.6% of the container fleet at 2.46 million twenty-foot equivalent units, according to BIMCO's Peter Sand, citing research by his organisation and shipping intelligence service Alphaliner.

The reduction in bunker demand from this segment will not be exactly in line with offline freight capacity, but could still be taken to be somewhere not too far from 10%.

Concawe's estimates put dry bulk, general cargo, ro-ro, ro-pax, offshore and vehicle carriers together at 37% of bunker demand; evidence for these segments is thinner on the ground, but we could assume bunker consumption reduction here may be similar to the decline in container bunker demand at 10%.

On the positive side of things, oil, chemical and liquefied gas carriers together represent 24% of bunker demand.

This segment should be advancing significantly at the moment with a sharp rise in Saudi and Russian crude exports and increased interest in floating storage; bunker demand here may be 10% higher than at the same time last year.

Left over are fishing and all other vessel types, estimated together at 13% of bunker demand; little information has emerged in either direction here, so their consumption could be considered unchanged for now.

Taken in aggregate ... a very rough calculation would leave us with daily bunker demand currently down around 8% overall.

Taken in aggregate, with the tanker gains paring losses in most other segments, a very rough calculation would leave us with daily bunker demand currently down around 8% overall.

Assuming the current disruption lasts for two months, and demand for the rest of the year is unchanged from 2019, it could leave an overall decline of just 1.3% for the year as a whole.

That would be a significant hit for the bunker industry, but could leave bunkers overall as one of the more resilient transport fuel segments this year.

SSY Futures set up a carbon desk earlier this year.