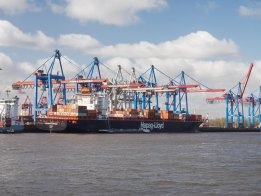 Container line Hapag-Lloyd's bunker consumption gained 1.1% on the year in the first quarter.

"This increase was essentially caused by a rise in vessel capacity compared with the prior year period and longer waiting times at and outside of ports," the firm said in a quarterly results statement on its website.

The firm paid an average of $613/mt for its bunkers in the first quarter, up from $384/mt a year earlier.

"Due to the clearly increased commodity price level factored into the forecast as well as the consumption volumes expected for the rest of the financial year, the negative effects of a rise in the bunker consumption price on the financial and earnings situation for this risk are now, based on the forecast assumptions, classified as severe," the company said.

Net-Zero Bunker Fuels 'An Opportunity for All', Says ICS

New report, 'Fuelling the Fourth Propulsion Revolution: An Opportunity for All' paints an upbeat picture of the maritime sector's energy transition.

Software developer start-up EyeGauge will take a three-month place in the accelerator program.