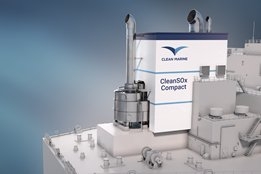 Clean Marine has released a simplified scrubber design aimed at reducing both costs and installation time.

The slimmed down design also reduces total installed weight of infrastructure by more than two thirds.

Both factors mean the overall cost of the unit is lower, although Clean Marine did not delve into specifics.

CEO Nils Høy-Petersen says the new design will also make it easier for smaller ship owning companies to opt for a scrubber solution for IMO2020.

"This development is in response to many shipowners that have requested both lower capex and opex levels for marine scrubbers while being able to satisfy the IMO 2020 emission level requirements," he says.

But despite reports, demand still seems to be holding steady.

As avails in the country remain tight.