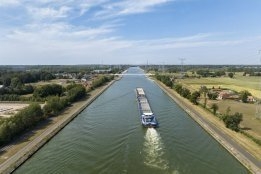 The ship arrived at the Holland Shipyards Group facility in Werkendam for its retrofit earlier this week. Image Credit: Future Proof Shipping

The retrofit of Future Proof Shipping's inland container ship FPS Maas to run on hydrogen is expected to be completed by the end of this year.

The ship arrived at the Holland Shipyards Group facility in Werkendam for its retrofit earlier this week. Once the work is completed -- scheduled for before the end of this year -- there will be a short period of testing before the vessel recommences commercial operations, a company representative told Ship & Bunker on Thursday.

The vessel is due to have its engine removed to be replaced with a hydrogen fuel cell propulsion system.

The company is confident it will have the appropriate permissions to run the vessel on hydrogen in time for when the work is completed.

"The bunkering operation for the Maas entails swapping out empty hydrogen containers for full ones, it is similar to loading and unloading a gas container onto a vessel," the representative said.

"Our team has been in touch with all the concerned terminals and local and regional authorities to ensure that we secure the permits in time."

The operation is set to launch on November 15 with the arrival of the company's bunker barge the MT Tulip.