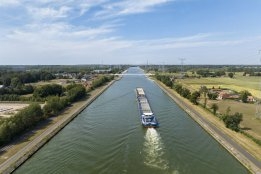 The vessel is due to have its engine removed to be replaced with a hydrogen fuel cell propulsion system. Image Credit: Future Proof Shipping

Future Proof Shipping's inland container vessel the FPS Maas has arrived at the shipyard for retrofit to hydrogen-powered propulsion.

The ship made its final voyage running on diesel from Belgium to the Holland Shipyards Group facility in Werkendam this week, the company said in a LinkedIn post on Wednesday.

The vessel is due to have its engine removed to be replaced with a hydrogen fuel cell propulsion system.

The firm has hired a team of 10 tanker brokers in Madrid that previously worked for Medco Shipbrokers SL.