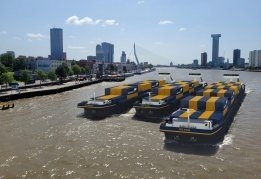 The conversion of Future Proof Shipping's (FPS) FPS Maas to run on hydrogen bunkers is slated to take place in the third quarter of 2022, the company has told Ship & Bunker.

FPS had originally hoped to complete the conversion this month.

"Getting new and innovative technologies into the water, also in conjunction with the pandemic has required us to readjust timelines. We are doing our best to have the FPS Maas sailing on hydrogen as soon as possible," a spokesperson explained Ship & Bunker.

So far, the Central Commission for the Navigation of the Rhine (CCNR) has recommended FPS receives an exemption from authorities permitting its use.

Work on the plan approval and hazard and operability study (HAZOP), which are the next steps after the recommendation, is in currently underway.

"We expect everything to be completed in time for the retrofit," FPS said.

A supply deal for the hydrogen was signed with Air Liquide earlier this month.

"We are working towards the retrofit of the second and third vessel in 2023 and 2024 respectively," FPS added.

Glencore declines to comment to Ship & Bunker on a report that it sold contaminated HSFO in Houston as well as Singapore.