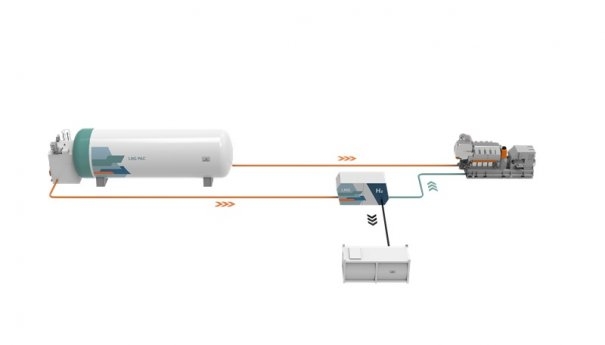 The system allows for ships to produce hydrogen from LNG on board, with the hydrogen output then being blended with LNG for use as a lower-carbon fuel. Image Credit: Wärtsilä

Engineering company Wärtsilä has signed a deal to support the development of an onboard system that can produce hydrogen fuel from LNG.

The firm has signed a joint development agreement with Finland's Hycamite TCD Technologies to develop the system, it said in an emailed statement on Monday.

The system allows for ships to produce hydrogen from LNG on board, with the hydrogen output then being blended with LNG for use as a lower-carbon fuel.

The process removes the carbon from the natural gas and processes it into a solid form for disposal at ports.

The companies plan to have a concept design ready by the middle of next year, and a prototype unit for testing ready in the second half of 2024.

"The concept will allow the existing LNG infrastructure to be utilised and enable production of hydrogen onboard in combination with Wärtsilä's LNGPac Fuel Gas Supply System," Wärtsilä said in the statement.

"By producing hydrogen onboard and blending it with LNG, the current range of fuel flexible Wärtsilä dual-fuel (DF) engines can reduce the vessel's overall carbon dioxide and methane slip emissions.

"Alternatively, the hydrogen can also be used in fuel cells onboard."

The relaunch at Suape may be linked to the firm's halting Salvador sales in late 2021 after selling its 330,000 b/d Mataripe refinery, a local source tells Ship & Bunker.