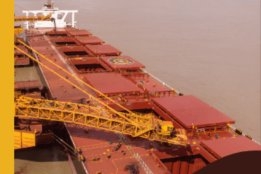 The dual-fuelled vessels the company envisages will be capable of running on methanol as well as conventional bunkers, and additionally will be equipped with five rotor sails each.

"All technologies together have the potential to reduce nearly 23% GHG emissions compared to the current Guaibamax generation," the company representative said.

"As part of a multifuel future-ready strategy, the vessel is also designed for possible retrofit of tanks to carry LNG and Ammonia."

Interest in methanol as a marine fuel has grown rapidly over the past two years. But that interest has thus far come largely from the container segment -- between them AP Moller-Maersk, CMA CGM and COSCO currently have 666,100 TEU of methanol-fuelled boxships on order, representing just over 2.5% of current global container capacity.

Methanol plans from the dry bulk segment have up to now been at the preliminary stages or on a smaller scale than Vale's ambitions.

In August Pacific Basin said it had concluded methanol propulsion was its best option for future bulker orders. Atlantic Bulk Carriers made a similar announcement in October.

And at this year's SIBCON industry event Cargill told Ship & Bunker it planned to be operating a methanol-fuelled bulker within a few years, but had not yet decided whether it would own or charter the vessel.