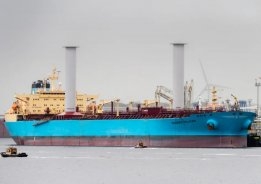 Wind propulsion system provider Norsepower is set to work with a unit of Keppel Offshore & Marine on the installation of its rotor sails on ships.

Under an agreement with Keppel's technology arm, Offshore Technology Development (OTD), OTD will assist in initial surveys as well as the design, engineering works and installation of rotor sails, Norsepower said in a statement on its website released as part of Singapore Maritime Week.

"Today's announcement represents a significant step in fully commercialising the Rotor Sail which is capable of achieving, on average, between 5 and 20% reductions in carbon and other emissions, as well as fuel and fuel costs in suitable conditions," Norsepower said in the statement.

"Now that fuel efficiency and environmental performance are becoming critical to shipowners' survival, it is clear that wind propulsion can provide significant emissions reductions and fuel savings while making vessels more attractive to charterers."

Norsepower has so far completed five tilting rotor sail installations, and is due to complete a sixth during the first half of this year.

GoodFuels CEO Dirk Kronemeijer shared an update on the firm's progress on LinkedIn.

The company is testing adding additional alkali to the scrubber's washwater during closed-loop operations to capture CO2.