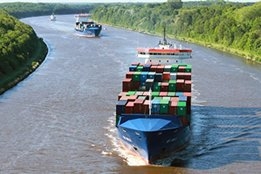 What is being billed as the world’s first use of CO2 neutral synthetic natural gas (SNG) bunkers has been slated for Q2 2020.

LNG bunker supplier Nauticor has already been signed up to delivery the SNG to 1,036-teu feeder vessel Wes Amelie, already notable as being the world's first boxship to be converted to use the alternative fuel.

As far as vessels are concerned, SNG and LNG are ostensibly interchangeable without any need to modify the vessel.

The key difference is LNG is a fossil fuel while SNG produced from so-called "green hydrogen" can achieve net-climate neutral status.

For this project, 20 tons of SNG will be produced using wind-power at automobile manufacturer Audi’s Power-to-Gas facility in Werlte near Cloppenburg, Germany.

That plant is under construction and scheduled to be commissioned for Q2 2020.

The trail is important as part of the ongoing debate on LNG's long term viability as a future fuel.

Critics of nat gas say it is a waste of both time and money to develop new fossil fuel infrastructure. Advocates argue that the new infrastructure will ultimately be used to deliver carbon-neutral fuel like SNG, and fossil-LNG in the interim that has a smaller emissions footprint than traditional oil bunkers.

"With this flagship project, we are showing that the already existing LNG supply infrastructure, as well as the LNG technology onboard of seagoing vessels are capable of using CO2 neutral SNG," said Christian Hoepfner, Managing Owner of Wessels Marine GmbH.

However, it remains to be seen how soon a climate neutral nat gas bunker supply chain can be realized. As Nauticor CEO, Mahinde Abeynaike, notes: "It will take some time until SNG can be produced in quantities and for a price, which are sufficient for the commercial use as fuel for shipping."