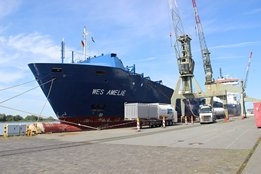 The world's first box ship converted to use liquefied natural gas (LNG) has been launched and bunkered in Germany, local media reports.

"Due to the smooth cooperation between the ship's crew, the Bremenports team, and our experienced specialists, the initial bunkering was a complete success," Schiffs Journal quoted Sonja Nesshöver, Director of the LNG Portfolio at Nauticor, as saying.

Nauticor managing director Mahinde Abeynaike said that with conversion of Wes Amelie, Wessels Reederei had become a "pioneer" in establishing LNG as a marine fuel for container ships.

The vessel has 15 identical sister ships, and the report notes further LNG conversions are planned.

As Ship & Bunker reported last year, the conversion was sponsored by the German Ministry of Transport and classed by Bureau Veritas S.A. (BV).

Meanwhile, the EIA warns of across the board production increase in 2020.