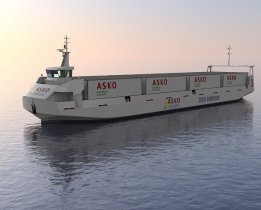 The ships will operate in the Oslo area. Image Credit: Cochin Shipyard Limited

Norway's ASKO Maritime has ordered two autonomous battery-powered ships, according to the shipyard building the vessels.

The company has ordered two of the ships with an option for two more from Cochin Shipyard Limited in India, the shipbuilder said in a statement on its website.

The ships will initially operate without the autonomous systems until they have gone through field trials in Norway, the company said.

"This Autonomous Electrical vessel project is an ambitious project in Norway partially funded by the Norwegian Government aimed at emission-free transport of goods across the Oslo fjord," the company said.

"Once in operation, these vessels will create a new bench mark for the merchant shipping world in the field of Autonomous Vessels with Zero Carbon Emission."

The companies plan to start a feasibility study for the vessel and its hydrogen supply from this month.

The number of scrubber-equipped ships needing repairs to their washwater pipes appears to be increasing.