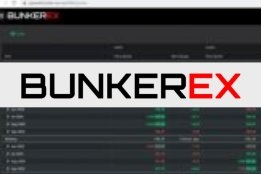 A spokesman for USTC confirmed the news to Ship & Bunker by email on Friday, without disclosing the price paid for the company.

BunkerEx was launched in 2017 as a hybrid digital bunker brokerage headed by co-founder and current CEO Ishaan Hemnani.

In addition to operating as a bunker brokerage aiming to use technology to bring transparency to the market, the firm has developed various technologies including an automated pricing tool integrated with the WhatsApp app, and the ability for buyers to track physical and forward bunker prices with the option to fix stems as far as six months in advance,

"The acquisition of BunkerEx is a testament to our ambition to digitalise and be at the forefront of innovation and new technologies within the industry," Nina Østergaard Borris, chief operating officer of USTC, said in an emailed statement.

We are already in talks about future plans to replicate the technology to other products and segments.

"We see great potential in BunkerEx and the team behind it, and we are already in talks about future plans to replicate the technology to other products and segments, thereby making it available and relevant to more USTC companies."

The decision for USTC rather than Bunker Holding to acquire BunkerEx was "because we see great potential for the knowhow and mindset of BunkerEx to drive digitalisation across the whole group," the spokesman said.

"I am extremely proud to start this new chapter together with USTC, and I look forward to joining a highly professional organisation with an aspiration to be at the forefront of digitalisation within the industry," Hemnani said.

First and foremost, BunkerEx is a technology company with a strong digital mindset.

"My ambition is to continue to create value for USTC companies on their digital transformation journey and to ensure we stay as industry frontrunners."

Bunker Holding already contains some digital capabilities within the group, perhaps most notably with KPI OceanConnect thanks to its acquisition last year of OceanConnect Marine.

Asked what distinct capabilities BunkerEx could add to the firm, a spokeswoman said, "First and foremost, BunkerEx is a technology company with a strong digital mindset and a proven track record as a relatively new start-up.

"Customers use the BunkerEx platform every day in order to optimise their logistics, and BunkerEx uses cutting-edge technology to give users reliable data at their fingertips."

BunkerEx's website highlights '100% independence' as one of the advantages of the service, and USTC plans to continue this aspect without using the service to favour offers from Bunker Holding brands.

"BunkerEx will operate independently, and they will continue to act as a trustworthy technology platform and competitive, independent broker covering the whole market," the spokeswoman said.