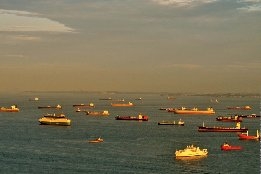 Ships in Singapore will not be able to use open-loop scrubbers. File Image / Pixabay

Marine and Energy Consulting Limited’s Robin Meech has added his voice to various shipowners who have said open-loop scrubber bans will have little to no impact on their economics.

"Banning [scrubbers] in ports and territorial waters will only reduce their viability by a small amount," Meech was quoted by Platts as saying.

Several analysts have raised the question of how localized bans might  impact scrubber economics after Singapore and Fujairah - both major bunkering ports - said they would prohibit open-loop scrubbing in their waters.

Star Bulk and Scorpio are among a number of listed owners who have been quick to say the impact of such bans will be zero as their calculations presumed the scrubbers would not be operating in port waters in the first place.

Evergreen Marine's new 23,992 TEU boxship the EVER ACE has taken over as the world's largest.

The company is looking for candidates with experience of negotiations and the shipping industry.