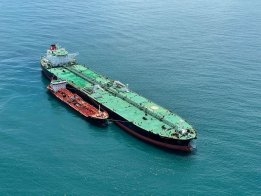 An easing of restrictions on bunker supply in Panama is likely to boost the country's marine fuel sales, according to global supplier and trading firm Monjasa.

Panama enabled Atlantic outer anchorage bunker supplies off Cristobal for some vessels last year, allowing these vessels to take on fuel while waiting to transit the Panama Canal.

As of August 29, the Panama Canal Authority has now removed restrictions on which vessels can take advantage of this bunkering area, meaning larger vessels will also be able to benefit.

The move followed consultation with Monjasa, a major supplier in the area.

Monjasa sold a total of 1.95 million mt of bunker fuel in the Americas last year, and noted Panama as one of its most significant operations in the region, with Balboa as its top supply port worldwide and Cristobal as its fifth-largest.

The decision is likely to "open up the market further, affecting efficiency and bunker volumes positively in the Canal," a company spokesman told Ship & Bunker on Friday.

"Working together and challenging the status quo through new bunkering solutions is an important contributor to an overall attractive global shipping hub," Rasmus Jacobsen, managing director for the Americas at Monjasa, told Ship & Bunker.

"Panama is a great historic shipping destination and since establishing our local office back in 2015, we have engaged actively to further evolve the bunker industry by improving tonnage quality and flexibility around the Panama Canal.

"The Atlantic Outer Anchorage is a good example of this. With modern tankers deployed in Cristobal, Monjasa has a solid track-record of performing these more demanding supply operations. Most recently, we have had a positive dialogue with the Panama Canal Authority on making this new supply area an easily accessible option for more shipping companies as of 29 August 2022."

Ship & Bunker readers can access a 10% discount on registration by clicking here and entering the code SB10 when prompted.

The company is looking for candidates with fluent English, a university degree and at least one year of sales experience.