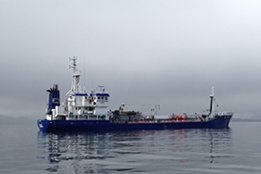 With IMO2020 now a little over a month away, Copec Marine Fuels (Copec) this month is one of the many bunker suppliers to commence deliveries of VLSFO fuel to their customers.

Earlier this week, Ship & Bunker spoke to Bunker Manager Milan Abovich to learn more about the firm's product and its wider supply plans in Chile for 2020.

"Our first delivery of VLSFO was on November 15. Since then we have supplied five vessels with VLSFO and we have seven more scheduled during the next week," he said.

A month prior to these first deliveries, Abovich says the refinery conducted testing that included tests with some of their own chartered vessels operating in the coastal trade.

The VLSFO product itself is being sold against the RMD80 spec with a typical density of 0.8798 kg/L and sulfur content of just 0.186% - well within the upcoming global cap of 0.50%.

Viscosity is currently around 6.6 cSt, but the plan is to raise this to at least 30 cSt.

"We have already loaded three different batches of VLSFO without any kind of issues. We have done compatibility and stability tests and all signs indicate that the products that we are blending work fine together," Abovich said.

"We are working closely with the refinery in order we have enough avails to all the increasing demand we might have."

On the logistics side, the VLSFO is available at several of the country's ports including Valparaiso, Coronel, Lirquen, Quintero, San Antonio, San Vicente, and Talcahuano.

"As our bunker ships have several segregations we don't have difficulties."

To service customers with scrubber equipped tonnage, Abovich says the firm will continue to supply HSFO after the 0.50%S cap comes into force from January 1, 2020.

"We are keeping enough capacity in our tanks of BT Don Pancho in case we have demand from vessels that have scrubbers, and we already have a fix demand of cruises that are heading to Chile with scrubbers," he added.

Also from next year the firm plans to sell products only against the IS08217:2017 specification.

Readers with enquiries or seeking further information can contact Copec as follows:

New IBIA Chairman to Speak at Start of IP Week

This year's event may attract greater attention than usual as it comes at the start of IMO 2020.