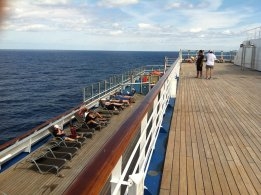 Cruise company Carnival has announced a trial of battery power systems on its Aida cruise ships.

Carnival Corporation has brooked criticism for its environmental record in recent months including from a US judge unimpressed with the company's performance.

However, this latest news has received has been given plaudits by non-governmental organisation Stand.earth. While maintaining its critical stance on cruise sector overall, the group has welcomed Carnival's initiative.

"It is extremely encouraging that the largest cruise company in the world is finally exploring technologies that do not rely on fossil fuels or utilize false solutions like LNG or open-loop scrubbers," said Kendra Ulrich senior shipping campaigner at Stand.earth.

"For years, environmental groups have been calling for the cruise industry to transition to hydrogen fuel cells and battery power from renewable sources — the only viable solutions for the cruise sector to adequately address its growing climate and human health-harming pollution," the campaigner added.

Aida's ships will be trialling hydrogen fuel cells on its ships from the start of 2021.

The company intends to pay back 80% of profits to shareholders from the first quarter of 2020.