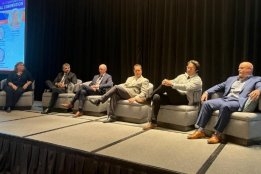 The discussion emerged in a regional supply panel at the IBIA Annual Convention 2022 in Houston on Thursday. Image Credit: IBIA

Bunker demand from the cruise segment in the Americas has returned to levels above those seen in 2019 ahead of the COVID-19 pandemic, according to a panel at the IBIA Annual Convention 2022 in Houston.

A panel focusing on regional supply issues in the Americas on Wednesday agreed that demand from the cruise segment was showing signs of health not seen since before 2020.

"The cruise business is back in full swing; they're fully operational," James Stapleton, vice president of global marine at bunker supplier Parkland Marine, said in the panel session.

"I think there's a handful of ships that are stuck over in the Asian markets, but for the most part it's back and doing very well."

"Basically what they're doing is using Panama as a home port," Garzaro said.

"It's a pretty good opportunity for us."

"For us the cruise season started last month, and it will go until April, so that will bring higher demand; it's going to be about the same volumes as 2019," she said.

Steve Bee of global testing firm VPS sets out how bunker fuel screening can be deployed to avoid fuel-quality problems.

The company now plans to install the system on all 13 of its ships.