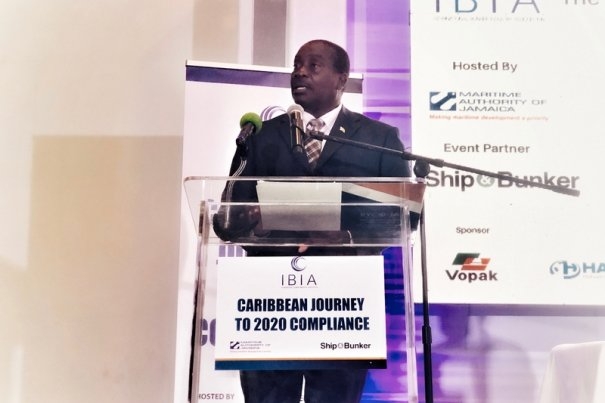 Jamaica remains bullish on its prospects to establish itself as the bunkering hub for the Caribbean region.

In his opening address at the IBIA Caribbean Bunker Conference (ICBC) Wednesday, Transport and Mining Minister, Hon. Robert Montague, told delegates that bunkering has long been considered a low hanging fruit by Jamaica.

"Jamaica's geographical position and its development of infrastructure to attract transshipment activities mean the country attracts more shipping traffic than warranted by our trade alone," he said.

"This has brought economic opportunities to Jamaica including the potential to establish the island as a bunkering centre in the region."

The minister noted a 2012 study by the government indicating if the island were to attract 10% of ships passing through the Panama Canal, the induced economic impact of bunkering could be over $3 billion in income, and 900 jobs.

"Bunkering is therefore a target for priority attention of the government and we are aggressively pursuing strategies to realize the projected growth levels," he added.

Efforts already underway include Maritime Authority of Jamaica (MAJ) having established a bunkering industry oversight committee to monitor developments related to IMO2020, and to advise on strategies that will position Jamaica as a leading bunkering hub.

Plans to implement a bunkering framework, including legislation that will provide for the licensing of bunkering operators and their vessels, is also "well advanced", the minister said.

The event is hosted by Maritime Authority of Jamaica and presented in partnership with Ship & Bunker.

The Saudi Ports Authority is now banning the discharge of washwater from scrubbers in its waters.

To achieve its aim, DFDS will need to reduce relative GHG emissions by a further 25-35% from 2019's levels over the next decade.