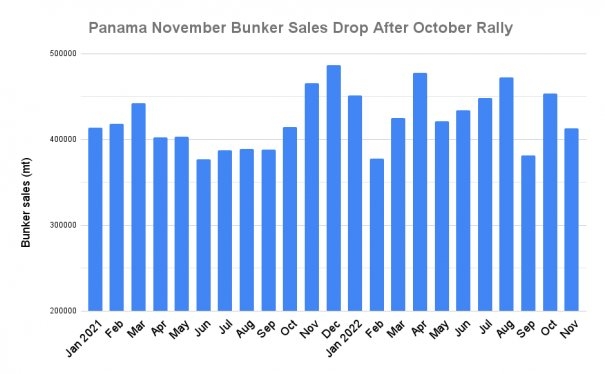 Marine fuel demand in Panama sank on both a monthly and yearly basis in November, but total sales for 2022 are still heading for a three-year high.

Panama's total sales reached 412,792 mt in November, according to preliminary data from the Panama Maritime Authority (AMP). The total was down by 11.3% from a year earlier and by 9% from October's level.

Singapore, the world's largest marine fuels hub, saw sales rise by 3.6% year-on-year in November and jump by 2.9% from October's level.

Singapore's average VLSFO price in November was down by 6.1% from October's level but up by 9.8% from the level seen a year earlier. Ship & Bunker's G20-VLSFO Index of average prices across 20 leading bunkering ports lost 4.9% on the month and gained 14.6% on the year to $713/mt in November.

Tue Jensen has joined the firm as head of risk in Copenhagen as of this month.